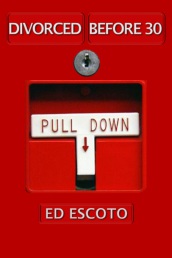 The words “I want a divorce” felt like my wife had pulled down on the fire alarm. The alarm was blaring, chaos surrounded me, and I felt powerless.

Divorced Before 30 takes you on the roller-coaster that is marriage. The ups, the downs, and every “OH SHIT" moment in between. Yes, divorce can be devastating, but life doesn't end there. That chapter is over and it’s time to write the rest of the story.

" There are literally thousands of books written by woman authors that dwell on the topic of divorce. The vast majority of these are fictional romance novel, the rest are self-help books written by women, most of whom had personally experienced this traumatic event. Regardless of whether they’re fictional or not, these books are quite poignant in their elicitation of real emotions from those reading it.

In writing his book, Mr. Escoto didn’t pull any punches as he told this portion of the story of his life. He simply tells his readers the roller coaster experience he’s gone through from being a child, to his teen years and first love, to finding her again to the ultimate commitment a man and woman can have for each other - marriage.

The author is brave enough, as a man, to bravely relate what had caused the downward spiral for their marriage, leading to the death nell known as divorces. At the end of the book, he admits he’d made a grievous error in the relationship he had with the woman who became his wife, the error being rushing into to marriage; and admonishes his readers not to make the same mistake. "